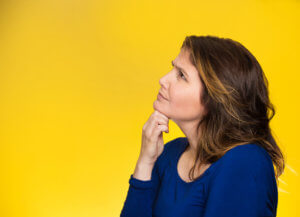 The Bitch Stigma (which I’ll sometimes refer to as BS because, let’s face it, that’s what it is) refers to the very real fear of the equally real potential consequences women can face simply for being assertive. Any time a woman tries to assert herself, assert her boundaries, assert her authority, or assert her self-respect, she risks being labeled bitchy, bossy, or domineering. These risks drive the Bitch Stigma, which bubbles up to undermine women’s confidence, creating self-doubt and encouraging self-defeating behaviors.

This sexist sentiment says that women who are described as bitchy, bossy, or domineering can’t get ahead and won’t be liked. Women are supposed to wait for other people to give us value and respect our boundaries. So if you're a strong, self-assured woman, you're breaking the unwritten rules and disrupting the status quo and that makes people nervous and uncomfortable.

The Bitch Stigma is a way of keeping women controlled through fear of consequences for simply being assertive and direct.

It can be a conundrum because, as women, standing tall can end up making us feel small and vulnerable. We put on our armor, we put on our resting bitch faces. We go out into the world to speak directly. We try not to back down or bow down. But it's scary.

We don't know what the consequences will be when we behave like the strong women we are. And there can be consequences to standing up for ourselves. We are still living in a world that doesn't consistently support strong behavior from women, and that's not going to change overnight. We could be rejected, we could spark violence, or we could even lose our livelihoods and the relationships that matter most to us.

So instead of risking all that, we cruise along with our heads down and hope that people will think the best of us and that everything will work out on its own.

It’s not working, it’s not enough, and it shouldn’t be acceptable anymore.

Women are told to be many things throughout our lives. Agreeable. Soft. Nurturing. Encouraging. But above all, there’s one thing we’re told to avoid being: a bitch. This book is going to blow that bullshit out of the water.

The Bitch Stigma is the pushback that women get when we stand in our power, when we set boundaries, when we communicate directly, and when we pursue our own ambitions. These are all perfectly healthy things for a human being to do, but thanks to deep-seated gender expectations, they’re often reserved for men. When women do these things, it’s considered inappropriate, and that's what creates the Bitch Stigma.

So women spend an inordinate amount of time managing our tones and managing others’ expectations and misconceptions. We live our lives in fear of being labeled bitches. Of being shamed and mocked for being “difficult.”

How do you change or shrink yourself to avoid being seen as difficult? How does the fear of being labeled a bitch (or some other version of that word) impact the choices you make?

Share your experiences in the comments below and check out the Bitch Stigma Library for printable journal pages.

Excerpt from Ditch the Bitch Stigma: Embrace Your Inner Badass

How is the Bitch Stigma Impacting You?

Sign up for the Ditch the Bitch Stigma Library for that & so much more!

Thanks for subscribing! Please check your email for further instructions.

Something went wrong. Please check your entries and try again.
Posted in Blog